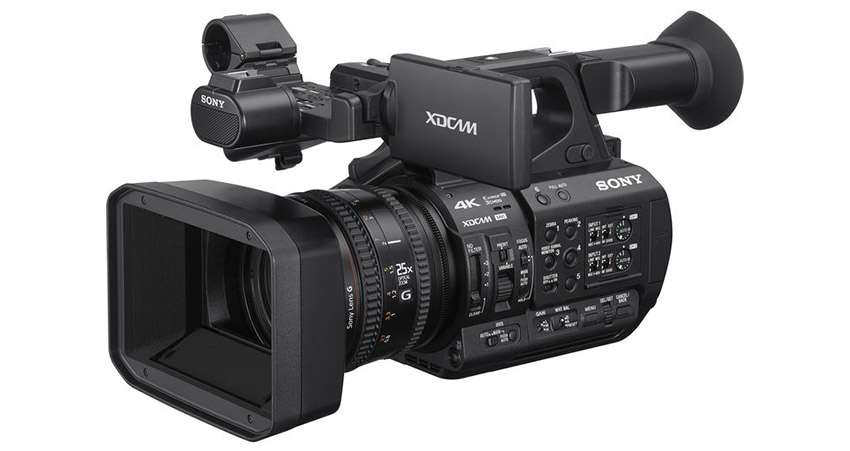 Alongside the FS5 II announcement, at their official NAB 2018 press conference in Las Vegas in April, Sony has also unveiled two new smaller camcorders – the PXW-Z190 and PXW-Z280.
Even though the new arrivals both shoot 4K video at 50p/60p and have identical design and form factor, their internals seem to be a bit different.

Beyond that, the PXW-Z190 supports HLG (Hybrid Log Gamma) which allows users to shoot and deliver footage compatible with both HDR (high dynamic range) and SDR (standard dynamic range). The unit can also capture both 4K and HD video simultaneously.

The camera records in XAVC-Long, MPEG HD, DVCAM, Proxy 1080i up to 9Mbps, and in MPEG2 HD422 (with optional license) to SD cards. The PXW-Z190 also features built-in 2.4 and 5 GHz Wi-Fi and has a 25x optical zoom lens and face detection autofocus feature.

The Sony PXW-Z280, on the other hand, captures 4K at up to 60p relying on three 1/2″ Exmor R sensors that provide improved low-light capability when compared to standard sensors. It also supports XAVC Intra/Long, MPEG HD422/MPEG HD, and DVCAM codecs while recording to SxS or SD cards. Unlike the PXW-190, the bigger counterpart supports S-Log 3 and can output 4K 60p via the built-in 12G-SDI output.

The camera also integrates a 17x optical zoom lens and an electronic variable ND filter and has three independent rings for focus, iris and zoom, so you can control everything manually thus eliminating the necessity to switch between different controls.

More information can be found on the following links:

and in the SONY presentation videos: